Posted by Jill Wexler of Suburban Misfit Mom on April 5, 2016 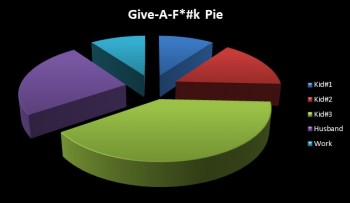 I can still see her sigh, shake her head a bit and lean back into the chair at Starbucks.

“It’s survival.  We have to do so much, so very much as wives and mothers and it’s never ending.  And yes, we’re going to plow through and we are going to do everything we have to do and we will finish what we started, we still have to survive it all.  And sometimes you just have to do something, anything, to be able to breathe again.”

I do know that at that point I was breathing better, just having her validate my feelings.

“And the thing is, you have to recognize that while we may love our kids and our husbands with unending love, we only have so much to give of our emotions and attention.  Like a pie – there’s only so much pie there.   And when someone or lots of them use up that pie, take too many slices, we’re done.  We have nothing left.  You have to take a piece for you, always.”

And thus was born the Give-A-Fuck Pie.   Only recently did I finally sit my husband down and explain it to him.  Because for years he has been taking more than his slice of pie.

The truth is I’d like to divide the pie nice and neatly and EVENLY.  I’d love if every kid got equal amounts of attention and emotional response from me.

But I get that everyone has different needs on different days.  Some days Kid #1 gets a bigger slice and some days Kid #2 gets a monstrous slice.  These days the 22 year old gets so much pie that I’ve decided to put her on a diet, intentionally slicing her pieces smaller because she is exhausting me with how much she’s taking.

You get it, right?  Only so many hours in a day, right?

The same goes for our emotions and our attention.  Once you’ve attended to the needs of one person, the pie doesn’t refill automatically.  This isn’t a buffet, for fuck’s sake.  Just like you don’t get an extra hour once you’ve finished grocery shopping on a Tuesday night after work.  Nope, that hour is gone for good.

My husband has had 3 back surgeries, has prescription medication issues, lost his job and faced other consequences.  I love him, but for years, especially the past two years, he has taken more pie than anyone else.  How?

It’s the doctors appointments, the pharmacy runs, the drama when he used his meds up too quickly, the trips to the ER for a steroid shot, the inability to have a conversation that doesn’t revolve around his back hurting.

It’s the subconscious refusal to not eat if I don’t make him breakfast or dinner or whatever; I don’t think he ever consciously thought “Damn her for not making breakfast, I’m not going to eat and then I’ll whine about it later.”  It was more the unwillingness to take care of himself in a basic manner (and it wasn’t all the time but it certainly wasn’t sporadic either).

It was the “let’s put off the zoo because I want to go but my back hurts too much to go today and maybe not tomorrow either.”  It was the reasons behind why the 2nd and 3rd surgeries were necessary; his career was primary, it was physical, it was his dream job that took precedence over taking care of himself.  Or us.

He has had way, way, way too much pie over the years and I finally cut him off.

Not totally cut off.  But his slice?  Is now minimal.  I sat him down two months ago and explained my theory.  And I just said “I can’t do it anymore.  I don’t have the energy anymore to deal with you.  I have to give the pie to the kids.  That’s my primary goal now.  They get the pie.  Not you.”

Because for years now, I let him cut off slivers from the kids’ slices, from my work slices.  I let him, make no mistake of it.  Because if I planned for the kids’ slices to include zoo time, but he needed to go to the ER, then their slices got smaller.  And some of it was necessary, but not all of it.

No more pie for you!  (Bonus points if you get that reference.)

I know it happens.  But at some point, the slices need to even out.  He’s had plenty.  And he’s mostly capable of handling a smaller slice of my emotions and attention.  He’s not a helpless baby, which is something I’ve had to reconcile my emotions with – I’ve been taking care of him for so long, with these little things, that I have to remind myself over and over NOT to give him more pie.

The kids need their pie.  From me.  And I need to be able to give it to them.  Without someone else spooning bits out of it.

As for me?  When do I get some fucking pie?

Yep, you’ve heard the advice before – “you have to schedule ME time in.”

Look, I’ve been doing this whole mom thing for 22 years and the wife thing for 17.  And I still want to punch people when they say that.  Who has time to “schedule ME time?”  It’s so ridiculous.  If I had plenty of pie for myself, we wouldn’t be talking about pie at all.

But about 18 months or so ago, I began the process of realizing that I have to have something, some pie for myself.  Anything  would do.  Because I was drowning, barely surviving, barely being me.  Some days were just…reminding myself to keep moving.  I was truly afraid that I would crack one day and just leave, even the kids.

So I took a hefty slice.   Just something that brought me back above the surface of the water.  I could breathe, I could focus, I could stop myself from running away.  It saved me, I truly believe that.

I make an effort these days to find “ME time” (gag).  I don’t run errands at lunch anymore (okay, try not to); I sit in my car and read or just decompress.  It’s not much, but it’s a slice of pie.  I try to see at least one girlfriend a week, to just talk; some weeks it’s not feasible.  But it’s a slice of pie.  I now write for this site and that has been a decent slice of pie in disguise…I didn’t realize how therapeutic the writing would be.  Pie.

But it was a fucking slice of pie.