The Golden Girl of Technological Innovation

Posted by Michelle Mullet of Suburban Misfit Mom on July 20, 2017 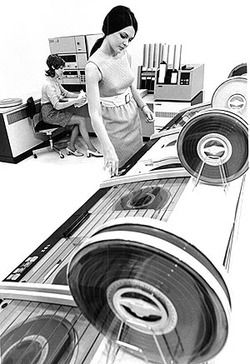 I know there’s such a thing as built in obsolescence, but the reality is that once I’ve used a computer for a few years, I think that’s it. Somehow, I become comfortable typing on a 10 pound dinosaur and then a friend quips, “Oh, wow, you still use that thing?” What do you mean?! I just bought this thing…uh, 5 years ago?” Hmm, maybe you’re right. So I try to keep up with technology but it feels a bit, Sisyphean.

I just bought a new MacBook and it already feels like too much technology. All I want to do on that thing is write and maybe try podcasting. I managed to download Audacity but the whole time I had a nagging feeling like I was taking waaaay too long to figure it out on my own. Let me turn down my Discman so I can explain.

Sometimes I try to do some investigative work like checking out settings on the phone or downloading new apps that are supposed to change my life but really they just waste time. I recently tried to volunteer for an organization that wanted all of their users to make appointments on an app called Calendly. Dumb name, dumber navigation and why can’t I just email a person and save it in my own calendar? Now I have to check like 3 other places to make sure I actually made the appointment? Down the rabbit hole of technology, things get convoluted, complicated and Calendly for no reason. No thanks. I stopped using that app and I’m much happier now.

I mean, just when I figured out what the hell the iCloud does, I’m supposed to learn how the Dick Tracy watch is connected to Interpol and how to download epic Wikileaks files for the masses.
Okay, maybe not. But it does feel a bit more difficult to navigate than it used to. Menus and clicky things don’t seem as intuitive as they once did. Where’s the mouse? Where’s the floppy disc? I mean, my new computer doesn’t even have a DVD player! Where’s the effin’ DVD player? Oh yeah, streaming this and on demand invisible TV waves. I get it. Sort of. But I don’t know for how much longer.

My kids that are 5 and 3 seem to know more tricks than me. And I guess that’s ok. While they’re drawing up blueprints for innovative drone designs on the iPad, I’ll be looking for my carbon paper and a couple of No. 2 pencils. All I know is that there is certainly a point of no return where you get so old you just think, man, I do NOT know what that is or what it does and honestly, I don’t care. Just pass me my Jitterbug phone and let me watch old DVDs of the Golden Girls. I’m done.