The Red Flags Were There. I Chose To Ignore Them. 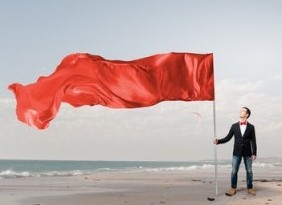 I was in elementary school when I became boy crazy. There was a game at recess we would play called, “Boys Chase Girls” and I loved it. I loved the attention I would get by being chased by a bunch of boys whose goal was to catch ME. There were days we would change things up and play “Girls Chase Boys” but it wasn’t as much fun because they could always run faster and I would quickly tire out. Of course there were a couple of boys that pretended to be slower so I could catch them except those were the boys I didn’t want to catch. The popular, good-looking ones were always hard to catch. And I always had my eyes on those boys.

In my teens and early twenties I was no longer interested in chasing after boys but still managed to fall for lots of games. I like to be in relationships. I like to be a girlfriend. I like to feel needed. I would almost always put the guy’s needs, feelings and wants before my own. Even at the cost of losing myself, which is what usually happened. It was like I was still playing “Girls Chase Boys.” Always running towards the prize, almost within arms reach. Loving and hating the feeling of that chase… Ignoring how it looked or felt to be chasing. Who was I back then??? Where was my sense of self? My pride? I felt like I had to be a certain way, act a certain way to catch the boy. Most of my time was spent trying to figure out what the boy wanted- and not focusing on what I wanted.

It’s common to self reflect and ask ourselves if there were red flags after a making a poor decision. Red flags are there for us to stop, take pause and consider what/how/why. When we see a red flag we have two choices- ignore them or confront them. If we confront them we are essentially standing up for ourselves, respecting ourselves…defending ourselves against something we know is wrong because our gut feels it. If we choose to ignore, we always remember….and that often comes back to haunt us.

When I look back at my sixteen year relationship with my ex husband and father of my children, I wonder why I wasn’t confident/smart/strong enough to confront or walk away when those red flags started popping up so early in our relationship- BEFORE I said “I do.”  Those red flags were so obvious. Sadly, I chose to ignore them.

When I first met my husband on that girls night out, I was instantly drawn to him. I liked the way he confidently walked into the bar, laughing and smiling. We happen to catch each other’s eye, he held my gaze and then he approached me. He extended his hand and introduced himself to me as, “Problem Guy.” (Red Flag). When I asked why he called himself that I quickly found out it was because he was out on the town while his live-in fiancée was at home studying for her bar exam. Calling himself “Problem Guy” should have made me run. Instead, I told myself something else- I could be myself without trying to impress (catch) him. It didn’t matter what he really thought of me because he was already “caught.” I found myself letting down my guard because he was essentially off limits with no possibility for a future outside of that crowded bar. So I decided to let him buy me that drink, caress my back, flirt with me and ultimately kiss me goodbye while slipping his business card into the pocket of my tight jeans. “Call me and let me know that this really happened.” Instead of running in the opposite direction- realizing this ENGAGED man was a total asshole and not worthy of my phone call, let alone ME, guess what I did? Yup- I called Problem Guy. Fast forward to a month filled of email flirtation, a couple “accidental” bumping into each other with our friends on the weekends… “Problem Guy” broke off his engagement and immediately became my boyfriend, or should I say, my “Problem.”

The beginning of our relationship was amazing. We were silly, love-struck goofballs. I had a man that was not running away from me! There was no chasing from my end. I had a man that seemed interested in moving towards a future together. It felt so good not to have to try so hard. I was simply being myself.

And then one weekend, about 6 months in, he took me to meet his family who lived out of town. Everything was fine until we all sat down to play a board game. His Dad and I were on one team and he and his Mom were on the other. We all had fun, laughing and cheering and after I scored the game point and said proudly, “That’s what I’m talking about!” He stood up. His face became red and stone cold and then shouted, “Shut the fuck up” into my face. I remember gasping in shock. As did his parents. Not only was this outburst the very first one of it’s kind, it happened in front of his parents that I was only just meeting. I flew out of the room and out the front door, embarrassed by his behavior. I stood outside, shaking in disbelief. His Mom came out first, apologized for him and asked me to come back inside. I politely refused. Then Problem Guy came out and told me he was sorry and although he seemed genuine, I wasn’t sure he even understood why he became enraged in that way. Today I know that it was the competition of that board game that triggered his little boy tantrum. How do I know this? Because it repeated several more times throughout the course of “us.” That ride home was a long one. I sat in silence while he apologized over and over. My head told me to end our relationship. I saw a big, giant, red flag waving in my mind. That flag told me that this man was not a nice or good man. His disrespect, his tone, his “problem” wasn’t OK with me. I wanted him to know what he did made me feel so bad inside. And after over an hour of him saying how sorry he was, I made a bad choice. I wish I could say I slept alone that night to teach him a lesson (and also to respect myself) but instead I went back to his place. It is something I have always regretted. It was this particular incident that defined our marriage- I allowed him to manipulate me into believing his words even though his behavior showed otherwise.

Another red flag was waved on what was to be the happiest day of my life…my wedding day. We had just had our beautiful ceremony and enjoyed our cocktail hour hugging and kissing hundreds of our friends and family who told us how happy they were for us. We got whisked away into another room while our guests entered the music-filled ballroom for the party. We were sitting alone together, waiting for our grand entrance where we would be announced as husband and wife. I was so excited and couldn’t wait to dance the night away. I was floating in joy. We could see into the ballroom and saw the dance floor packed as the ten-piece band cranked up the R&B tunes. I looked at my husband. He looked distracted, irritated…almost annoyed. “What’s wrong?” I asked. He barked at me, “What’s wrong?? What is taking so long? How long do we sit out here? I am actually BORED at my own wedding!” Um….. Bored? HIS WEDDING? Need I say more? I saw that red flag and on that day, it was especially painful.

After we were married, the flags continued to pop up but I had to ignore them. I already chose my fate… I folded all of those flags and put them away and many are long forgotten. Some continue to haunt me. Like the day before my birthday after we had been married for several years. My ex had a second car, a luxury convertible roadster that he proudly drove on sunny weekends. One windy day, I parked my car too close to his car in our driveway. When I opened my driver’s door, the wind took a strong hold and crashed it against the side of his car. OH S-H-I-T!!!! The damage was done in a flash. I had dented his baby. I went inside with a big giant pit in my stomach and in tears told him what happened. “WHAT DID YOU FUCKING DO???” I felt awful. I was careless. I should have parked further apart. I could not have felt worse. I understood he was mad and I let him be mad. He freaked out on me and made me cry. The worst part is that he stopped talking to me and even on my birthday morning, when all should have been forgiven, he was still mad. That birthday sucked. He spent the day out getting estimates. I was alone.

Sure I can tell myself that had I not met, married and ignored those red flags I would not have the two children I have… that I love more than anything and can’t imagine life without. Should have, could have, wouldn’t have had…. And because of these two beautiful reasons, it’s an easier pill to swallow. I don’t punish myself too much.

When I left my marriage I emerged into a stronger and more confident version of myself. I soon got back out on the playground and quickly found myself being chased. From a distance those boys looked interesting and some even captured my attention. But as some got closer, I noticed many were holding red flags! With a new sense of awareness, self -love and wisdom, I quickly turned around and walked off the playground. No more chasing. This girl is done with such games. I told myself the next guy would have to be pretty special, sincere and kind to capture me. And you know what? He will be.