The Slimmer’s Guide to Hangry People

Posted by Ailish Delaney of Suburban Misfit Mom on October 16, 2017 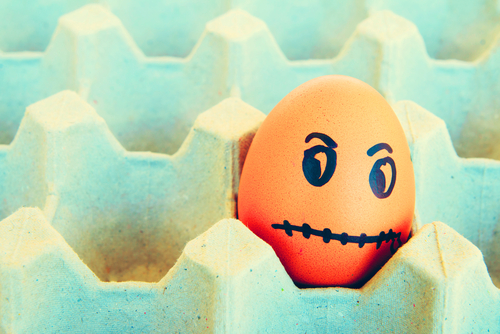 (Hangry = being angry because you’re hungry)

So a few months ago I decided to go on a diet. Oops, I forgot, we’re not allowed to call them diets, they’re a lifestyle change. My bad. But look, here’s the thing…if I can’t eat an entire family sized bar of Cadbury’s in the eerie light of the fridge at midnight, it’s a diet.

Classes aren’t for me. I’ve done them before and two hours of yay-ing and ah-ing when someone has lost a pound or gained a pound, all that does is make me want to bury my face in a chocolate éclair. I don’t know if it’s the norm, but every class leader I ever had – and there have been several – talked in a strange nasal patronising voice. I think they’re taught the voice in slimming class classes.

“Mary, well done, you’ve lost two pounds this week” Cue clapping for 30 seconds.
“Sandra, oh dear, what happened here? You’ve had a little gain…never mind. What are you going to do to get back on track next week, dear?” A hush would descend over the room as all eyes focused on Sandra, who would reply in a faltering voice:
“It’s star week.”

Know what star week is? It’s polite code for your period. FFS, we’re grown women and we’re not allowed to call it a period? One group leader told me once that it’s because some women get embarrassed and some men get uncomfortable. WTF? It’s a period, what is this…the 18th century? I’m surprised bleeding women aren’t excluded from the class once a month.
So, in the absence of not wanting to subject myself to that again, I decided to go it alone – I know the plan and whatever I don’t know is on google anyway. And yay, there are Facebook groups for people who don’t go to class.

This would be a breeze.

Ha! Dear Lord, there are some hangry men and women sitting at their keyboards. I’m a ballsy woman, but even I wouldn’t post pictures of myself on there. A woman showed a photo of herself in a dress she’d bought, which was like 6 sizes smaller than the ones she used to wear pre-‘lifestyle change’. She captioned it with something along the lines of how proud of herself she was, and how she felt great going out in this dress.

Well, these hangry people shot that woman down in flames.

“Nice dress, shame you didn’t buy the right size.” And “That doesn’t suit you at all.”

The poor woman probably read those comments, ripped off the dress, and sat in her fridge all night eating her kids’ lunchbox treats. Way to go fellow dieters.
One woman (who established herself as my favourite there and then) posted a photo of the Chinese takeaway she had decided to order for herself. The photo was deleted and she was banned from the group. She was my hero. Apparently, it was ‘cruel’ to post the photo.

I myself was banned from an online group. We were talking about the differences weight loss makes to our lives. I said it would be nice not to have a baby bag anymore. What do you think of when you see the words ‘baby bag’? Me, I see a pouchy tummy which has never shrunk back into shape after carrying three big babies. But no…one man took great exception to my terminology and complained to the admin that I was discussing my vagina! Really??? Why would I be looking forward to not having a vaj? And what kind of diet makes it disappear anyway? Sex is the only enjoyable form of exercise, so taking away the vagina would be like removing all the rowing machines from the gym.

Ooh…let’s not forget the ‘this is a stupid diet and it doesn’t work’ people. I kid you not, these men and women will be really hangry, and list every single thing they’ve eaten all week, and lament the fact that they haven’t lost weight. When pushed, however, the conversation will take an interesting turn:

“I stuck to plan 100% all week. Well, I say all week, but I don’t really count the weekend. What did I eat on the weekend? Um…not a lot…I had a McDonald’s on Friday night, oh and Saturday morning. I was really good and had a salad for lunch though. I can’t remember what I ate Saturday night because I was so drunk, but I woke up Sunday morning with a lump of kebab meat on the pillow next to me, not sure if I sicked it up or it fell out of my cleavage. And then a fried breakfast because it’s the only thing that cures a hangover. So…what’s your point?”

I get it, weekends are for part-ay-ing, but for the love of God, don’t whine about it when you don’t lose any weight the following week. Suck it up, buttercup.

So, for me, I walk a solitary path. Like the story of the turtle and the hare, slow and steady wins the race. If I want a week off I’ll take a week off. Christmas calories don’t count, and sometimes the smell from the local Indian restaurant is just too much to bear. But I’m a big girl (pun intended) and I’ll take it on the chin.

After all, it is a lifestyle, not a diet.

[…] the whole thing here, and while you’re there grab a cup of something hot and read what some of the other writers […]