Posted by Jill Wexler of Suburban Misfit Mom on March 10, 2016 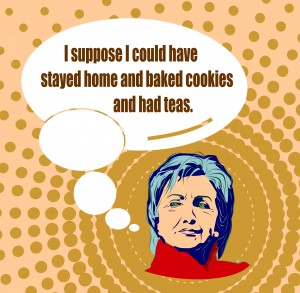 Feminism is one of those sweeping movements.

It’s been sweeping for, what, a few millennia now?  Heh heh.

What prompted this musing is watching Hillary Clinton not gaining the young female vote in such a manner that I think probably stuns her.  I know it stunned me until I started thinking about it.

Disclaimer:  I’m not a political expert nor an expert on feminism.  I’m just a mom, wife, daughter, working woman (not that kind).

Look at what she’s accomplished!  She is the only female to successfully make it to the Final Four of presidential nominees and it looks like she might go onto the championship game this election year.  She was Secretary of State.  And a Senator.  She went to Yale Law School during a time her female counterparts were still being told that they could be wives, mothers, secretaries, nurses, teachers and that’s all.  She survived a media nightmare with her husband’s indiscretion and stayed on course.  She’s not afraid (or at least she hides it well) and handles the curveballs with impressive aplomb.

So why don’t the young ladies see this?  Is it because she’s too “mom-ish” or is it her choice of suits?  Her hairstyle?  Her aging lines?

I just don’t think so.

I’m 42, a Gen Xer in all my glory, and I know my generation of girls, collectively, was told we could be whatever we wanted.  I remember how in awe my teachers were of Christa McAuliffe and I didn’t fully understand why they were.  I mean, they were the ones telling us over and over again that we could do that too, so what was the big deal?

It didn’t really hit me until my daughter was in the 5th grade and I was working with another mom to desperately keep a group of them in Girls Scouts (we failed, by the way).  The other mom was a computer expert working for a local utilities company, a big one.  I’d known this mom for a while and knew that her job was fairly high ranking, at least in the computers portion of the company.  I also realized she was sometimes a lone female in the industry, both utilities and computers.  But I didn’t really give it much thought until she arranged a Girl Scouts meeting with the other females of her company who were high ranking.

I remember sitting at this table, with eight 5th grade girls, watching their boredom as these ladies tried to detail their education credentials and how they worked hard to get where they were today.  And it hit me – these 5th grade girls were the extended version of me.

Whereas I had been told over and over and over again that I could be whatever I wanted and it was drilled into me all through elementary school and even high school, my daughter’s generation (the top of the Millennials today) wasn’t even told that.

Because we Gen Xers didn’t have to tell them.  The road was paved for them.  There was no need to constantly barrage them with the obvious…instead we said “you can be whatever you want” as a generic wave to their youth.  We didn’t include the criteria of “as females.”

Don’t get me wrong.  I’m certainly not saying that the sweeping movement is over.  What I am saying is that the young females today don’t appreciate Hillary because they don’t understand it.  In their viewpoint, of course Hillary is a presidential nominee.  If she wanted to, which she did, she ran for President.  Duh.  (okay, they don’t say “duh” – that’s totally me)  Why do we care that she’s a woman running for President?  Big deal.

My mom was born in 1946 and was given the options I listed above as her choices after college (yeah, she was encouraged to go to college only to be a housewife…did you ever see “Mona Lisa Smile” with Julia Roberts?  Excellent movie.)  My grandma had even fewer options.

Segue here:  one time my grandma, who is 92 this year, told me that if “Roseanne” had been on the television when she was a newly married woman and mother (so in the 1940s and 50s), she would have walked out on my grandpa and gone off on her own.  She just had no idea that was an option. Or that anyone else felt that way about being a wife and mother…she absolutely loved that show.

And it probably realistically wasn’t an option for her to go off on her own in the mid-1940s.

We could continue the backward trail of how each generation of women before had less.

Sure, there are young women who are in the spotlight, bringing attention to wage discrepancies and massive HR issues involving sexual harassment and worse.  And that just proves that yes, the sweeping movement of feminism is still in the middle.

But notice they’re not having to do Afterschool Specials or “The More You Know” commercials directed to girls about “you can be whatever you want when you grow up, even as a girl!”

So Hillary, regardless of what happens in this election cycle, I admire you for your role in this sweeping movement.