The Truth About Santa?

Posted by Jessie Ford of Suburban Misfit Mom on December 8, 2016 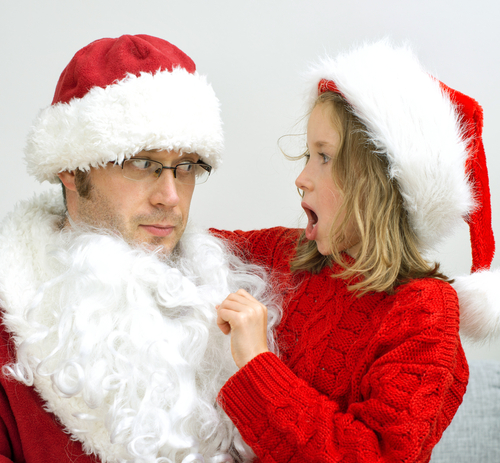 Spoiler Alert!! If you are under the age of 10 or believe in Santa Claus do not read any further!

This past Christmas has been filled with wonderful memories, sad happenings, and uneasiness. You see, I’m the mother of a two year old who is terrified of Santa Claus.

When I was a kid, believing in Santa and seeing his gifts was magical for me. I don’t remember being afraid of him unless I blocked that memory out completely. What I do remember vividly was waking up on Christmas morning early, walking down the stairs and getting that first glimpse of the tree full of presents and the stockings jam packed. It was so magical the room seemed to sparkle. I can still see this picture as if I’m looking at it right now. The way Santa left me everything I always wanted and more so beautifully around the tree was mesmerizing.

Being the only little cousin at the time, my older cousins helped preserve the truth about Santa for a while concocting stories up whenever I was in doubt. When the real truth about Santa being my parents was revealed, I think I was relieved because all of my friends had already learned the real fate of Santa.

I was so looking forward to being Santa to my children and making the room sparkle like my mom did for all those years. I couldn’t wait to buy the gifts, find my hiding spots, have special tags made up from Santa, and start traditions that would make lifelong memories.

For Lyla’s first Christmas, we went to the town of Bethlehem in CT where they have a big Christmas fair complete with Santa and Mrs. Claus. As a baby, she had no idea what was going on but sat right on Santa’s lap, giggled, laughed, and had a blast.

The following year, we weren’t so lucky. She cried at the mere sight of Santa. Still too little to understand who Santa was or what he did, we didn’t start any traditions just yet. And I refused to force her to sit on Santa’s lap screaming and crying. Just walking by him at the mall, she would suction on to my legs so afraid of that man with the big white beard.

I was so looking forward to this year. At 2 1/2, Lyla is a pretty smart kid and I figured it was a good age to start our traditions; from Elf on the Shelf, to visiting Santa, to leaving cookies and milk, and experiencing the magic of Christmas morning.

But the same thing happened this year. Lyla was so afraid of Santa. I asked her if she wanted to see him at the mall and she vehemently shook her head no and almost cried. She told me she didn’t want to see Santa and under no circumstance was he to come to our house!

I brought her to the mall a few times but she told me she did not want to sit on his lap or even see him. I let her know that Santa was a nice man. I told her he would bring presents if she was a good girl. It didn’t matter. I refused to do this to my child so we avoided Santa.

As Christmas was nearing closer and closer, I kept reminding Lyla that Santa was going to come to our house and bring presents. But it made her very uneasy and she didn’t want him to come. I started thinking about these Santa fables we tell our children and all the wonderful Santa memories I had growing up. Is it worth it to keep lying to my child who obviously is nervous or should I just be honest and tell her the truth. Should I tell my little girl the truth about Santa so she isn’t afraid but risk missing the magical experience?

If you think about it logically, we teach our children to not talk to strangers. We tell them to stay close to us and hold our hands so they are safe. Every day we instill in them our values hoping they will grow up well and be good people; no cheating, no stealing, no lying.

But every year, on a very commercialized religious holiday, we expect our children to forget all those rules. We tell them this strange man all dressed up in a red suit and fake beard is nice. We allow them to sit on his lap and lie to them saying he will bring the things he wants if they behave. All the magic and hype is a lie. It’s the truth and yeah the truth sounds pretty sucky.

In all honestly I really feel like being honest with my child and making sure she feels safe knowing no fictional man named Santa will break into our house. But is it worth it? Taking away a potentially magical experience that lives on in my memories for life? I guess I’m not sure. I will decide next year and if she is still frightened of Santa, I may just tell her the truth.