Things I Shall Do to Intimidate My Son’s Potential Suitors

Posted by Taylor Williams-Durant of Suburban Misfit Mom on June 17, 2016 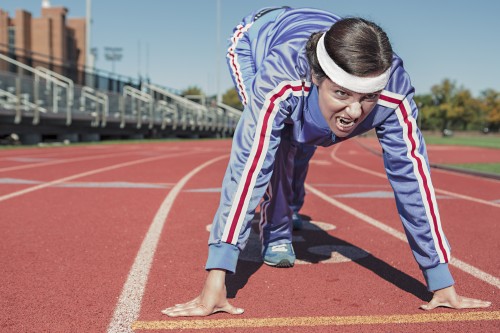 My son is a strapping young man. He’s handsome. He’s confident. He’s burly. He’s a jokester with a soft heart. He’s got a mess of wispy blonde curls and bright blue eyes. He’s like the prankster you grow to love (and excuse from all his pranks.) He kisses and hugs with wild abandon, and speaks his mind. He’s a work hard, play hard kind of guy. He knows how to say “thank you.” He loves his mother, treats his sister like gold, and clearly respects his dad. I think any girl could see that my boy is an obvious catch.

But see, that’s how I already feel about him. Sure, his dating profile would end at “Also recently started pulling his diaper off and peeing like a rampant fire hydrant all over every square inch of his crib;” or, “Carries around a tattered blue bunny aptly named ‘Blue Bunny’ that smells like a dirty puppy and feels remotely like a worked Brillo pad for the vast majority of the day.” But in my mind, this little dude is golden. And I can only foresee this getting better (or, worse – depending on who’s defining it.) I can see myself oohing and ahhing over him like the most loving, adoring, omniscient band groupie for the rest of his life.

I think loyalty and gentle obsession for one’s kid is cool, but sure, I have my boundaries. He can drive me completely bananas, and I allow space for that. But it’s kinda like how we all can make “yo mama” jokes about our own mothers, but the minute someone else does? Oh, it’s on. That’s how I can forecast feeling about my son. Like, he can (and will) drive me to the brink, get on my last nerve, chap my ass (you know, all those things a traditional mom might say about her children) but I want his suitors to know that Mama don’t play.

I was thinking the other day, as a decidedly not intimidating person, what are some of the tactics I could take to intimidate my son’s potential future suitors? Be they male or female, how might I show them who’s Boss? How do I adequately portray that my son is and will always be a ball of ridiculous aggressive sunshine in my heart? And that if I want to always call him “Buppy” or “My Sweet Little Pumpkin Bun,” that I always shall?

Here is the brief list of intimidating options I came up with:

1. I will adorn myself in ambiguously threatening tattoos. Perhaps the traditional heart tattoo filled lovingly with “MOM” — but with a barbed wire around it, and underneath, saying “Don’t Mess.” Or possibly a wolf with wild blue eyes, foaming at the mouth, and surrounded by Gothic lettering that states, “My Boy is Mine.” Or maybe an intricate symbol that could equally be an implication that I’m a) in a cult, b) a witch, c) in a gang, or d) all of the above. (When in all reality, they are just beautiful Gaelic designs I found randomly by perusing Pinterest….even without making an account! Extra scandalous!!)

2. Use uncomfortable language and start awkward conversations. I’m happy to make dinner for My Little Lambchop’s love, but then I’ll throw in things like, “do you like pork? Only when it’s moist, right? Aren’t those weird words: pork and moist? Gross!” And I’ll walk around the kitchen alternating between “PORK!” and “MOIST” at least a dozen times each, giggling in between each one while cutting up the salad makings. Or per chance we will get into a conversation about the merits of going gluten-free. And I’ll announce, “PHEW, a main reason is GAS. You know, a way to really shoot stuff through your digestive tract is to eat all the leafy greens instead, amiright? I mean WOW! It’s like, you may as well just massage out your intestines like an accordion or those weird cake icing tubes! I for one am going to continue to eat crackers.”

3. Any time I am in the Potential Suitor’s presence, I will talk about my (fake) training in Brazilian Jiu-Jitsu. Picking my Lion Cub up from high school? I’ll have the window rolled down and act like I’m on my cell: “Yeah, Justine, I totally love the aggressive high it gives me – today is ‘Experimenting with Fire’ day in class. It’s gonna be epic.” Or perhaps we’re moving My Love Bug into his freshman dorm and there’s some major flirtation in the hall: “Gosh, my shoulders sure are taxed from those Samurai exercises we did yesterday! It was worth it though — I got waaaaay more agile wielding a huge sword.” Or lastly, say my Dear Boy’s wedding day arrives and I’m making the finishing touches on the wedding party’s garb. While adjusting a boutonniere: “My goodness, I hope the bride/groom is ready for the surprise at the reception! It was tough finding rooms for all of my street fighting friends who coached me for the flash mob – whew!”

And then, as things go, I will learn that this Potential Suitor really just loves my boy to pieces and has equally as delightful terms of endearment for him. And I shall embrace him or her, and hope that they like me tattooed, inappropriate, and well-vetted the the martial arts.