Posted by Amber Pittman of Suburban Misfit Mom on December 2, 2015 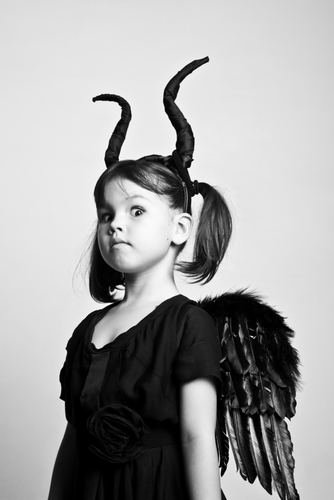 I came home Friday night and went to the mailbox to pick up the post. I noticed that handfuls – great giant handfuls – of my beautiful flowers were ripped out and thrown on the street. I knew immediately who was responsible: that asshole kid down the street. Or that other asshole kid that plays with him. Or maybe another jerk kid whose parents don’t teach them to act right. I contemplated putting a sign up that said “Remember what happened when Lizzie looked at the flowers,” but figured The Walking Dead reference would be lost on him and just seethed instead. This is one of the many reasons I don’t let my kid play with asshole kids – no matter how many times they knock on the door. But there are more…

I am no stranger to uttering swear words, and I have no doubt that my sweet little angel baby will do his fair share of it one day, but when fourth graders are dropping the f-bomb while walking down the street, then shiftily looking at me to see if I heard them, it’s too much. The first time I hear him utter that word I will slap soap in his mouth so fast… I get that he’s going to do it one day, but he should at least try to hide that shit. Whisper it to his friends as they giggle and side-eye the adults to see if they’ve been overhead. Don’t be so blatant about it.  Be sneaky like a normal kid. These brazen little assholes are too cocky, too early – I smell psychopath, and I’m not into it.

Maybe not the kids in my neighborhood specifically, but we all know these kids. And yes, I am generalizing. I watch enough Judge Judy (my DVR is an enabler) to know that there’s a pattern with asshole kids, and I don’t want mine following it on the daytime television where my beloved Judge screams at him (or me) from the bench. Kids will do stupid shit because they’re kids and they push boundaries, but these kids are the ones who know right from wrong and do wrong anyway. Sure, you can tell me they are crying out for attention, and maybe they are, but that’s not my concern. Making sure my kid doesn’t end up in prison, or on a VH1 reality show looking for love, are my concerns.

Again, I get that this is part of childhood. I did it, you did it, it’s fine. But these are the kids that will openly disobey their parents, not just behind their backs, as kids will do, but in front of their face with this ‘Do Something’ look about their creepy little eyes. I’m not a huge spanker, but I love taking shit away as punishment, just like my mother before me. I remember hating that so much, and wishing she would just beat me rather than take my shit away. That’s how I know it works. And I’m okay with my kid not always obeying – I like that spunk and I will ignore little skirts of the rules just because of it. But you had better act right in front of folks, and these kids might as well be telling their parents to fuck off with their behavior. It’s like they are trying to see just how awful they can be. Then the parents have to chuckle and act like it’s all okay, when inside I know they are thinking about how they are going to punish their demon spawn behind closed doors.

These are the kids that will do shit just to annoy you. Again, all kids do it – I get it, but there’s a fine line and we both know it. Some kids will say something over and over again, or make loud noises. These little assholes are the ones that will open all the juice boxes and not drink them, who will break your kid’s stuff then walk away, and who will make messes and go home with no thought of helping clean up. And generally their parents will allow it, because they can tell already that they have lost the battle with their child. That it will be a battle until they are 18 and can finally go to jail or move out and be someone else’s problem. It’s defeat I see in those eyes, and your feral child sees it too.