Tonguing Strangers as a Crowd Pleaser

Posted by Stradivarian Me of Suburban Misfit Mom on September 14, 2016 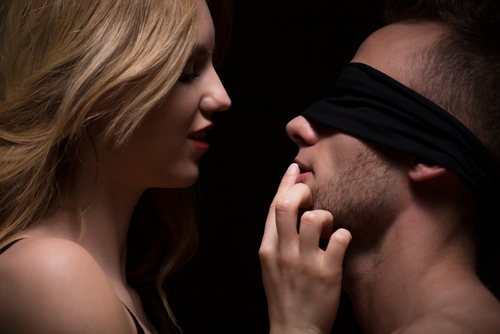 Imagine the soft tongue of a handsome stranger enthusiastically exploring the hollows of your open mouth, when suddenly the moment is interrupted (and enhanced) by the soft exploration of another man’s tongue…and then, minutes later, yet another. Then imagine these consecutive sensations happening on stage in front of an audience of 300 on-lookers.

That pretty much sums up my Saturday night.

So, how does a regular ole suburban mom like me find herself in a situation like that? Quite simply: by default and then by design.

While Googling a “NYC interactive theater” experience to entertain my teenaged kids, I instead unintentionally stumbled across a show at Joe’s Pub called “Never Sleep Alone.” As evidenced by this benign electronic search, motherhood is indeed fraught with unexpected dangers.

“Never Sleep Alone” is an interactive comedy show featuring Dr. Alex Schiller, a self-proclaimed socio-sexual evangelist who encourages on-stage make-out sessions with the overt goal of promoting casual hook-ups between audience members. This I had to see, so I bought tickets and soon enough found myself last weekend sitting in the “Players” section of Joe’s Pub, with an area designated for “Voyeurs” behind me.

Convinced I would not be among the few chosen to “perform” that night, I downed another drink and answered the questions of the disheveled, mad-professor “researcher” dressed in a white lab coat and taking meticulous notes on his clip board. His thick Italian accent wooed me into a frank and honest assessment of my general attitudes towards sex, and, indeed, intimate details of my sexual history.

First question: “How many times a week do you pleasure yourself?”

Second question: “Have you ever had sex in public?”

Apparently, my answers were enticing enough to win me a place on stage, along with seven other willing participants. While it all sounds very titillating, I actually found it more reminiscent of middle school parties when I played “Seven in Heaven” with pubescent boys in my BFF’s basement in 1977. I was thankful that this time the males were considerably taller and seemed to have successfully completed adolescence.

In watching a playback of a cellphone video of my on-stage debut, I’m embarrassed to say that I was so fully engaged in my French-kissing social experiment that I continued to lock lips long after all other participants had ceased their saliva swap. My assigned partner didn’t seem to mind, so I didn’t either, and we continued until Dr. Alex politely assumed control of the show once again. Nothing like being escorted off the stage for excessive participation.

The evening was full of similar interactions involving color-coded Lone Ranger masks, blindfolds, clever Q&As and games of Twister, but the night culminated with a sketch entitled “Go Down or Go Home.” It featured the sexiest man in the room, the hottest woman in the room, a slice of watermelon and a banana.

I have to admit that serving as both a Player and a Voyeur in this freaky comedy show was exhilarating. The scenarios were outrageously ridiculous, the participants were joyfully uninhibited, and the audience was completely enveloping.

Ultimately, the show was sexy, harmless, and fun – and apparently perfect for a French-kissing creeper like me.