We Mother Each Other’s Children

Posted by Tricia Jelonek of Suburban Misfit Mom on February 4, 2016 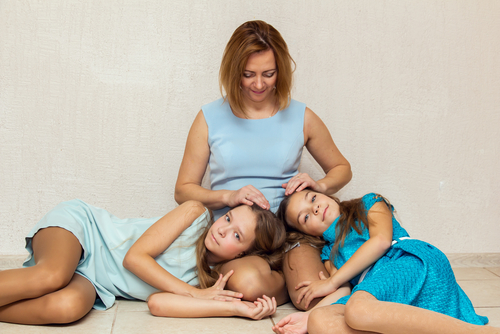 When my girls were little, I didn’t have much to worry about with their friends.  With most days being spent refereeing play dates for things like hair pulling, toy snatching or the always dreaded tattle telling.  There were times that if I heard “she won’t let me play with that” coming from their little faces one more time, I was going to turn all “crazy psycho mom” on their asses.  But we all know that turning into crazy psycho mom in front of the other “normal moms” was a definite no-no.  Seriously, all mothers know we save that shit for when no one is watching.  Instead, we smile politely, trying to appear like the “I have it all together mom”, not wanting to overstep our mothering boundaries.

Now, as my girls entered into their tween years… still not much worrying going on in the friend zone. I would give them my usual “you’d better act right or this will be the last friend you’ll ever have” speech before that lucky friend got to the house.  Most of those days, the girls would be locked up in their rooms doing annoying tween things like obsessing over what boys they liked or giggling over nothing.  On the off chance they ventured out of the safety of the bedroom for things like snacks or something to drink, hardly a word was spoken while out in the open.  Again, not a lot of opportunities to spread my mothering wisdom.

It wasn’t until my girls entered into the teenage wasteland years that things changed.  Seriously, there is nothing like finding a pregnancy test in your bathroom to jolt you into a big giant reality check.   But there it was, staring up (or glaring is more like it) at me from the wastebasket.  Now, there are not a lot of times where I am rendered speechless…and this was definitely one of those times.  I knew it wasn’t mine.  I mean; I’d actually have to be having sex with a man… a real one (and I don’t think battery operated or imaginary ones count).  As I stood there, mouth hung open to the floor, worst case scenario’s running through my warped little mind, my daughter breezed in without a care in the world.  “Gosh, don’t freak out mom, it’s (insert any name of your daughter’s friends here) not mine” she said when she saw me.  Like somehow, that made finding the test all better.  Well, okay, I can’t lie; it did make it a tiny pinch better.  It was in that moment I had to make a decision…either ignore the fact that I found the test or tackle the issue head on with all the girls.

For those of you that don’t know me, jumping in feet first is kinda my thing.  Leap first and clean up any damage later right?  If this were my daughter, would I want someone stepping up and mother my child in this situation?  And the answer is a big Hell Yes!  Our jobs as mothers do not end with our own children, but instead, extend out to those who will have a strong influence on them.  Let’s face it, teenagers are joined at the hip 24/7 with each other.  I mean no one wants their teenagers feeding off the wrong kind of friends.

With my mothering instincts in high gear, I barged into the bedroom to talk with my daughter’s friend.  And not as the cautious, careful not to upset anyone mother of her friend, but as her second mother.  I scolded her for not using her brain and having unprotected sex at the young age of 16.  And I scolded her for giving up her “cookie” so carelessly.  I talked to her, along with my own girls, about the consequences of having sex with just any boy.  I explained how boys would say or do anything to get our “cookie”. I spoke with them on the importance of protecting our “cookie”.  I encouraged them to ask questions, and I answered them as honestly as I could without putting any more ideas in their heads.

I mothered her and did not feel remorse afterwards.  I mothered her and did not feel that I overstepped my boundaries with other people’s children.  My reward?  I now have an open line of communication with not only my girls, but anyone who chooses to be friends with my girls.  I opened an avenue for them to be able to speak freely while maintaining all mothering boundaries with them.  All my girl’s friends call me “mama” and know that they can come to me with anything.  They also know that if they are acting stupid, crazy psycho mom will not hesitate to make her appearance.  And I only hope that their mothers do the same for my girls.  After all, it’s time to unite our mommy super powers for the good of all mankind or in reality… more like a better mother/child relationship.  And seriously, what mother wouldn’t want that!

I’m not sure why but this blog is loading incredibly slow for me. Is anyone else having this issue or is it a issue on my end? I’ll check back later and see if the problem still exists.