Posted by Jill Wexler of Suburban Misfit Mom on May 5, 2016 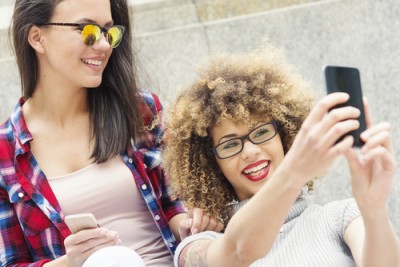 For all you parents with kid kids, no, it doesn’t get any easier.

Sorry to burst your bubble.  No one warned me that the adult child could be harder than, say, the toddler.  So consider yourself blessed to have me around.  You’re welcome.

Oh em gee if I hear that one more time, I might just lose it.  Seriously just lose it.  Look kid, I’m sorry that you don’t want to talk to other human beings, but sometimes you just have to do it.  You’re no longer a kid and per HIPPA, FERPA and other policies, I can no longer make your doctor’s appointments for you, handle your car insurance or renters insurance issues, or talk to your landlord when your toilet overflows.  Make the damned phone call.

Side story:  When she just had to have a new (used but new to her) car that she reeeaaaallly couldn’t afford (and didn’t listen to anyone because duh, she’s an adult), I told her to call the car insurance company and have them change her old car out for the new (yes, we were keeping her on the family insurance).  She whined and groused, via text of course, that she didn’t want to call and couldn’t she do it online instead?  I shrugged, via text of course, and she went on her merry way.  Days later, I got a call from the agent, nice as can be because we’ve known each other for a while, to tell me that my darling daughter not only changed her car but also put in an address change too.  You know what that means, right?  No more living at home, no more family insurance rates.  The agent felt bad because it was already processed in the system (because online, duh) and there was no backtracking.  Had she just called, like I said…

2.  “What’s the big deal? I didn’t show up for the appointment/commitment.  So what?”

Girlfriend, did I teach you nothing?  For the love of all creation, when you say you’re going to be somewhere, you just damn well show up.  End of story.  Or you call (see #1) and cancel politely.  It is a big deal because you mess up people’s schedules otherwise.  And feelings can get hurt, like, I don’t know, your little brothers who were looking forward to you coming over to dinner.  Or the psychiatrist who could have scheduled another person in.  Or that second job you thought you’d try and then decided you didn’t like it so you just didn’t show up without notice?  You put those people in a tight position.  And that sucks, chica.

On this one, I keep looking back and going “didn’t I raise her to be respectful?  So what happened here?”  The only answer I have is that while it takes a village to raise a kid, they pick their own village when they leave the nest and we ALL know what some villages are like.

3. “This is such a hassle. It’s stupid how much paperwork and phone calls and stuff just to get my car fixed by insurance.  I don’t want to do it.  It’s not worth the time.”

Oh, this one gets me.  I can explain until I run out of breath that insurance companies bank on you not following through with that claim and yet…she doesn’t seem to care.  I can repeat over and over again about how you or I have paid x-amount of dollars a month for said insurance and by golly, you need to use it and get your car fixed after the icy parking lot accident. And how now that you’ve taken your sweet time about it, it’s no longer just a bent wheel, it’s several other things too because you drove it around semi-broken.  You make minimum wage and live with a roommate…you can’t afford to fix the car.  Fill out the forms.

You know, my patience was tested when she broke her phone (for the 52nd time and I don’t believe I am exaggerating here) and we still owed money on said phone.  And a grandparent offered to pay her two hundred dollars (yeah, you read that right) to do a major craft project that could be used as a Christmas gift.  “I just don’t have a lot of time.”  Gee, according to Facebook and Instagram, you seem to have a few hours here and there to spare.  Priorities.  If you don’t want the job, then cough up the money you owe me.  Oh you can’t?  Then maybe we need to revisit those priorities.

I will admit the phone one really got to me, but not for the money reasons.  Even though yes, we all used to drive cars without cell phones, it does reassure me as a parent that should an accident occur, she could call us or call for help.  So when she took the “I don’t care” route instead, it was all I could do to NOT fix the phone myself.  (Okay, confession, I did buy a $14 flip phone and we changed her number to it…don’t judge.)

I don’t want to work either, kiddo.  Suck it up.  And DO NOT say “ugh, I just want to be a kid again.”  I’m so tired of that phrase, Ms. Peter Pan.  If you don’t want the second job, then rework your current paycheck.

5. “Mom, my herbalist was raided and now she’s in jail and has four $25,000 charges against her. I feel so bad for her.  When do we get a new governor?  This is totally stupid.”

Your “herbalist” got caught dealing weed?  You do realize it’s against the law in our fair state.  No, I’m not really against the whole thing, just, you know, there’s this thing called “the law.”  Your “herbalist” broke the law, kiddo.  And it could have been you.  And the governor doesn’t have that much to do with our state’s decision on this.  Consequences, kiddo, consequences, no matter how stupid you think it is or how sad you feel for her.

*bangs other side of head against wall*

You know, I’m never going to mock or belittle anyone’s mental problems since I have my own issues.  But I sometimes feel like she uses this excuse as…an excuse or a crutch.  This is really a bigger topic for a whole other post, but some days I just want to smack her and say “you know, instead of whining that you have anxiety, why don’t you try some of the proven methods to help get over it?”  You know, like the counseling I offered to pay for, the various books or apps that help out, also that I offered to buy.  But no, it seems easier to just throw the anxiety card and stop all progress forward.

Hmm, did you change the oil when it was time to, per that sticker on your windshield?  No?  Maybe you should go do that.  This one, I admit, is a tough one too because who wants their kid to drive in unsafe conditions.  But I offered to help out with that and the response I got was “I don’t have time” (see #4).  So you’d rather destroy your car, that you make car payments on, rather than suck it up and go get the oil changed?  Apparently yes.

I sometimes wonder if she’s really not adulting well or if my yardstick is inaccurate.  See, I had her when I was 20, so I had no choice but to be responsible and do all the things necessary for us to survive.  So maybe I’m being harsh.

After all, she’s never been arrested.  She’s not gotten pregnant (When she turned 20, I had a massive party yelling “You are NOT a statistic and you beat your mom!  Woohooo!).  She appears to drink and not drive, to the best of my knowledge.  While she struggles with money, she hasn’t become a stripper.  And she was out of her herbalist’s house in time.

But the hardest thing of it all, in one lump sentence, is letting them fall.  Things like the phone and the car and the rent and doctor’s appointments.  Watching it unfold, knowing exactly what the outcome is going to be because we’ve all been there two decades ago, is just damned hard.

So enjoy your pre-18 year olds.