Posted by Tricia Jelonek of Suburban Misfit Mom on October 18, 2016 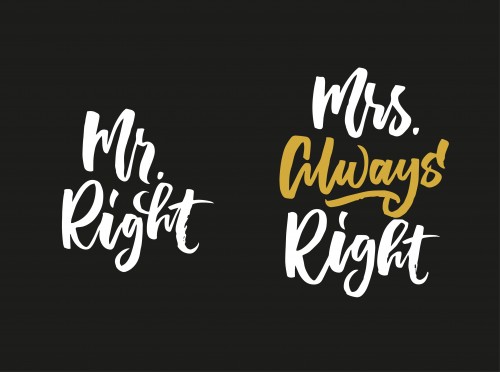 So I was recently lucky enough to marry the love of my life… literally as in 10 days ago lucky. The wedding was true “Yanneck” style.  Me in my game day attire and him in his overalls on a Sunday smack dab in the middle of Buffalo Bills football. The day was perfect; the Bills broke a two game losing streak and my new hubby didn’t lose his shit over me being too damn tired for sex that night.  Seriously, keeping to my typical fly-by-the- seat-of-my-pants fashion, I let most of the stuff go to the last minute… so sleep was the only thing happening in the bed that night.  And thank God for family because I wouldn’t have gotten through without them… or alcohol.

After our brief but very meaningful ceremony, I thought I would feel totally different.  Like somehow because I was now Mrs. Love of my life, everything would be… I don’t know… all magical and shit.  But, I was still me… just with a different last name.  Don’t get me wrong… I was just as wonderful as I was before we said “I do”.  I am going to chalk it all up to being in a state of constant wedded bliss even before we  made it official.

Speaking of official, I am now left with what should be the joyous task of legally changing my name.  Notice I said should be?  Maybe since it’s been like a billion years since I have done this last or maybe it’s just that I blocked out all the horrible memories, but, WTF?? Honestly, changing my last name has been harder than trying to stay sober during Mardi Gras (and we all know how much that happens right?).   I knew I was in trouble when I went to turn in our marriage license in exchange for the marriage certificate.  Apparently working for the clerk’s office doesn’t require you to think because the stupid lady put the wrong date… bless her heart (and for the record, adding that makes it all okay down here in the South).

My next stop was to the DMV… and really… who doesn’t love standing in long ass lines for hours on end?  Especially after chasing my water pill down with a jumbo sized coffee. But bonus when I found out that I could change my voter’s registration card at the same time (P.S. there is no way in hell I am missing out on this election).  I guess I shouldn’t have complained about long lines until after I went to the Social Security Office.  Really, they made my lazy unenthused teenagers look like working rock stars.  And side note… you might want to check if they accept your new temporary license for the name change BEFORE waiting.  It will save you tons of embarrassment when you are being escorted out of the building after going all psycho.  Okay, maybe going all psycho was just in my mind, but I so wanted to go off .  After I collected myself, it was on to the bank.  The teller took one look at me and calmly did whatever I asked, so I guess the whole Social Security Office wasn’t a total wash after all.  The day was almost over and I still needed to hit up my credit cards, bills, health insurance and anything else associated with my name.

I guess this is the part where I kick myself in the ass so I stop complaining.  I mean, it wasn’t long ago that I thought I would never be here again in my life.  But, as the newly Mrs. Love of My Life, here I am living a dream I never thought would be a reality. Just the fact that I found such a wonderful man who I can finally share my life with is beyond amazing.  I just wish sharing his name would have been an easier process… maybe I should be complaining about having no wine bar at each location instead.