When Your Child’s Teacher Calls

Posted by Melissa Jacobowitz of Suburban Misfit Mom on March 29, 2016 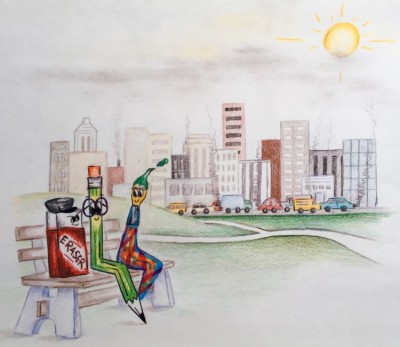 I cannot say for sure, but I really don’t think that my parents received many calls from school about my sister and I when we were growing up.  I know it’s a different time in the world, but I guess I assumed that I would experience the same thing.

In our school district, the phone number comes up as the general phone number, so I never know which child they are calling about until I find out who is on the other side of the call.  Kind of like a fun guessing game that I didn’t ask to play in.  And my first thought is always “Crap, someone threw up.”

Recently the infamous phone call was for my daughter who is in elementary school.  The first thing her teacher said was that my daughter was fine, so I knew she wasn’t sick.  My daughter was working with 2 other children when her teacher heard the word “murder” coming from their small group.  The teacher approached their group to find out what was going on.  It turns out that my daughter was the culprit.  Great.  She was talking about an online game where you have to run away to escape the people who are trying to murder you.  Great.

We know that we let the kids play too many online games.  It’s a combination of a) being a little lazy b) allowing them to make their own decisions c) still being a little lazy.  Many games are harmless, but once in a while we catch them playing something not so harmless.  This murder game referenced earlier has been banned from the house.  But to which I have to say – I think the game might be teaching real life skills here.  I mean, isn’t it a good thing to know how to run away from someone that wants to murder you??  That said, I guess you can’t ban the game from their memories!  (Like in a court of law when the judge says disregard a comment.  It’s stricken from the case.  Really?  Does anyone in the jury actually forget??!)

Anyway, the teacher spoke with my daughter and the other 2 children; and then spoke with my daughter alone.  She asked my daughter if she knew what the word meant to which she nodded yes.  It took her a while to admit where she heard the word from, but she finally did.  The teacher explained how inappropriate the word is and how it could upset other children.  She told my daughter that she was going to call me to fill me in.  Completely agree with all actions taken. Teachers have a huge responsibility and I’m sure communicating with us parents isn’t on the top of their list of favorite things to do.

When I was speaking with her teacher, I asked how the other children were, as I wanted to make sure they were okay.  In my mind though, I’m wondering: Who are they?  Will they tell their parents that my daughter said the M word?  I’m going get “looks” from them now.  It’s all downhill from here.  Should I call the realtor?

What do teachers think when they start to dial the phone?  I can’t help but wonder what goes through their heads about our parenting skills.  Over the years we’ve had heard….

On the parent side, can I just say that these calls are a killer?  Necessary, yes.  But a killer!   “Thank you for calling…It is true.  She really isn’t a fan of buttons.  I’ll speak to her when she gets home.”  What should my reaction be? Do I sound like I care enough?  Or don’t care at all?   Do they think I suck?  Those 5 minute or less calls typically result in way too much agonizing about parenting skills!

I mean, I know this could all be a lot worse and a bit of this is just overthinking and over analyzing.  My kids are not bad children – not the bullies, not the blatantly disrespectful children, not the troublemakers.  We all have our poor parenting moments, but overall I know we’re doing pretty well.  And admittedly, I have to say that I truly hope my children’s teachers think so too. Why wouldn’t I?

All jokes aside, I’m not dismissing what my daughter said – it was not cool and we spoke about it when she got home.  And I’m also not dismissing how she learned the word – that’s on my husband and I as parents – and I told her so.  It’s all about learning, growing and taking responsibility together.  And to the teachers – please keep those calls coming.

(Beautiful artwork provided by Amanda Lutz and can be found, purchased and inquired about on AmandaLutzArt.com . Amanda also creates amazing murals for businesses and homes! )

great post.Never knew this, thanks for letting me know.