Who You Gonna Call

Posted by Amber of Suburban Misfit Mom on November 29, 2016 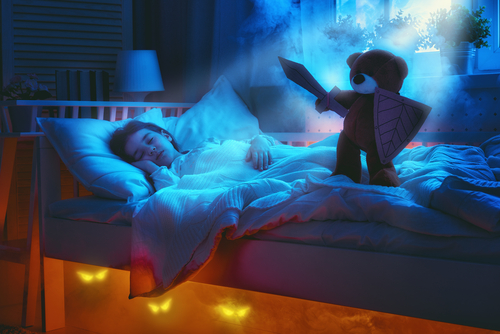 My three and a half year old is a watchful fellow of few words. He loves to dance, sing, and do things independently. He’s pretty shy at first in most situations and enjoys sitting back and watching his older brother (who is definitely not shy) entertain people.

When my son was around a year or so, I was rocking him in his pitch black room to get him to sleep. This was more for me than it was for him since he was such a good sleeper. He was just about asleep when he shot straight up and started hurriedly waving and saying “Hi! Hi! Hi!” to the pitch black corner of the room. To say the hair on the back of my neck was standing up would be an understatement!

As the months passed and he learned more and more words, but still was mostly quiet, he sometimes would tell me random stories. We’d be playing with his toys together in the basement and he would say things like “Mommy, the builder of the house was pushed. The builder was killed.” I would just look at him quizzically and try to focus back on my lego character I was playing or the blocks we were working with.

There was another time when he was lying in my bed on a Saturday morning and I was reading to him. He snuggled in real close to me and said he was feeling scared. I asked why and he said he was scared because my older son was hiding behind the curtain. I looked at the curtain seeing no one was behind it and said, “Sweetie, your brother is still asleep.” He curled in real close at this moment and told me my friend was visiting me. When I asked which friend, he said, “I don’t know but she’s right there.” He pointed right above my face to which I chuckled and asked him if she was flying. He nodded!

Whenever I bring these stories up to my husband he gets very irritated! He does not believe in ghosts at all. I do tend to fare on the side of believing in them. Yes, I said it. I know, I know…go ahead with the “Who ya gonna call?” jokes.

We had about a year of uneventful random stories from our little guy until recently. A few weeks back I was putting him to bed and as he was finally quieting his Halloween induced sugar crazed body and as his eyes began to slow their blinking to that peaceful final close, they burst open and he started hysterically laughing. When he finally calmed down and could answer my question of what the heck was he laughing at he shouted, “Shoshi!”

“Who IS Shoshi?” I demanded.

Not really sure how to respond I just let him continue to crack up and have a conversation telling “Shoshi” to stop tickling him, etc. To be frank, I was silently freaking out. He finally fell asleep about 40 minutes later.

The next day at the breakfast table me and his brother asked him about Shoshi sort of poking fun. He just laughed and laughed. I began to wonder if it was just an outlet for him to be silly with. A make believe friend named Shoshi that he could laugh with. Or maybe that was a stretch for me to feel better?

Thanksgiving came and my Mother-in-Law was visiting. My little guy was dancing to a music video that was on. I pulled him in for a squeeze and asked him, “Who do you love?”

He said “John! I love John. John is inappropriate! Haahhahahahah”.

Me and my MIL looked at each other like huh? We know a John and he is definitely the furthest thing from inappropriate!

The following day while he was soaking in the bath, I asked him to tell me more about John. He started laughing and doing his “Pee Wee Herman” voice. He said John and I met in the forest. No, in the jungle. John is bad. Haaaaaahaaaa!” I asked if John was a real person or pretend, like an imaginary friend and he looked confused and said “No. Yes. No…..Yes! Haaaaa!”

So here I am. Officially creeped out and really hoping that the builder, the boy hiding behind the curtain, the friend floating above me in bed, Shoshi, and John are all just figments of my little 3 year old’s imagination. Please let that be it.

Does anyone have Bill Murray’s phone number?