Why Are We Scared Of What Other Moms Will Think?

Posted by Amber Pittman of Suburban Misfit Mom on April 13, 2016 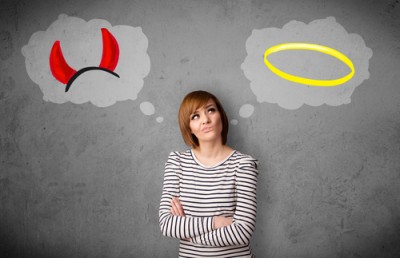 I really wanted to write a post about a disastrous date Saturday on my personal blog, but then I faltered – what if my kid’s teacher read it? What about his friend’s moms? In the age of social media nothing is really that private anymore, so I got all fickle and changed my mind. I could deal with my mom scolding me (if she actually ever read anything I wrote), but it wouldn’t really be fair to my son if he got shunned at birthday parties because his mom received a sermon after sex – yes, I’m serious.

But it isn’t just the stories of my very personal life that I shy away from. Me, of the loud laugh and don’t-give-a-shit attitude; the one who will burn a bridge in a heartbeat and break up with friends who are toxic without issue – I don’t want to stigmatize my son with my salty words and spicy topics.

I don’t know why I do that, but I know I can’t be the only one. When you have kids, your life becomes about them. I used to be cool – now I am just my son’s mom. I’m a cool mom (everything is a Mean Girls quote), but that is who I have become during the majority of my waking hours. I’m not knocking it – it’s fairly adorable when his friends see me out without him and still want to talk and give hugs, but I’m not worried about them reading my blog. We live in the South, where sass is appreciated but talking about your sex life and getting plastered on a weekend without your child is not; it’s okay to praise the Lord but not the D.

So I preach living authentically while watering down my own life so it’s palatable to other mommies and teachers and grandparents. I’m the room mom, we go to Cub Scouts – I need to watch my mouth. Or do I – do we?

I have met enough cool moms through my kid’s many activities and social events that I know we exist. They might all be married moms in my neck of the woods, but they at least (some of them) pretend to not think I am scandalous. I mean they probably do, but they keep it to themselves. Southern women are like that, talking shit behind the back is the way to go in the south. The heat slows our speech and our desire to get into face-to-face arguments, but I can sense that some of them could totally be part of my tribe. They are the cool moms too, and they probably don’t always post that meme, or tell that story, or share that picture because they’re scared – not for themselves, but for their kids.

My sister often asks me “aren’t you too old for that?” The “that” she speaks of could be another tattoo, or a piercing I am thinking of, a night of shots at the bar when my son is with his father, or having a pile of friends on my bed to watch a movie – and it’s the same feeling family as the one which keeps me from not giving one single shit about what anyone else might think of my antics. You’re never too old to do anything you want with your life, but if you postpone living it you may well wake up and find your bones have become tired and some stomach ailment prevents you from indulging and that you are, in fact, too old to do what you once could.

So what’s the solution? Not be online friends with your kid’s teacher because you’re worried she’ll judge him because Mommy has drinks with friends on the weekend when he’s not home? Not friend that lady from work who you LOVE because you’re scared she’ll think you’re a trollop if you post a certain meme? Or does the solution lie in practicing what you preach and actually living your life exactly how you want?

I’m a good mom and a cool mom, but I am also Amber. I was her pre-child and I will be her long after he’s all grown up. Other moms and teachers and grandparents might turn their nose up at the things I do, but it really isn’t their business – even if you do put it out there to see. They have the right to judge you silently, but if they judge your child on something he has no part of, is that really a family you want your kid associated with anyway?

I am not PC, and regardless of how PC our society has become, I won’t cave. Just like I won’t cave and stop taking Jell-O shots every so often. Before we became mothers we were us – messy and complicated and disastrous and beautiful – spawning children doesn’t change that, it just makes us think we have to water those parts of ourselves down so they are more palatable for a small group of people. But much like whiskey, adding water to me makes me less spectacular. So if you’ll excuse me, I have an inappropriate meme to post on Instagram.