Posted by Taylor Williams-Durant of Suburban Misfit Mom on June 23, 2016 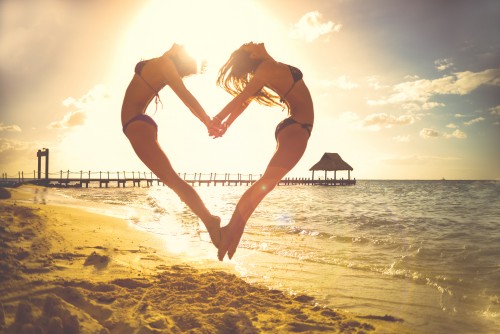 At the gym this morning, I heard two older women, probably in their mid-70s, making small talk. They spoke about their kids for a while, a restaurant they both liked, and what weights they liked to do. I liked how they bantered, and it was playful and comfortable. As they were wrapping up and saying goodbye, one woman said to the other, “And by the way, I really like your top!” The other woman looked down at her own shirt, shrugged, and without looking at the woman who had just complimented her, responded, “It’s just a shirt,” and walked away. I watched the woman who had given the compliment. Her body changed completely, her smile dropping, her shoulders taking a new shape, her hands looking for how to gesture. With a nervous laugh she said, “Oh, OK…it’s just a shirt…right.” She walked away abruptly to a new weight machine. It was strangely painful and awkward to watch.

Why don’t we women just say, “Thank you”?

It was striking to see the energy shift in their whole conversation in an instant. I felt the smile drop from my face, too, my shoulders sagging. I had to make an effort to stop from looking again and again at the woman who had complimented the other, just to see how she’d taken it. I wanted to go over and say, “Hey – I liked her top, too…wasn’t that shade of turquoise beautiful?” But that felt odd, too. Should it have? I don’t know. I’ve always done things like that, and I’ve always gotten mixed results. I’m usually the one who throws out compliments to other women on things as simple as a t-shirt in a beautiful shade of blue, or maybe their glasses or even the way they chose to do their hair. Or, it could be something about their life, like a kick-A performance, or how great of a job they’ve done raising their kids, or a cool thing that happened at work – and still, so easily things are pushed aside, rejected, or explained away.

“Oh, this old thing? I got it super cheap, so it’s nothing special.”
“Eh, I did OK…my voice sounded dumb.”
“No way, my belly is still gross.”

When I give a compliment, I’m aware that it’s not that I’m looking to bestow some magical goodness on them or make them like me or fishing for compliments on myself. It’s genuine and to me, a moment of connection. But I know: I do it, too. I know that when I’m the recipient of some nice gesture like that, I hear myself rejecting it. Or, if I’m aware and manage to say thank you first, sometimes it’s as if I just…can’t…hold…off….and my thanks is followed with “but….”

I wonder if we do this as women because we confuse rejecting compliments with humility. They are not necessarily the same, and we need to stop acting like they are. We are (appropriately) taught growing up that we should avoid being Arrogant Annies or Jerky Jens or Boastful Beverlys. That’s no way to make or keep friends, and it’s a poor representation of self to go around tooting our own horns all the time. However, I also believe that we are (inappropriately) taught that girls and women have an added social pressure to reject ideas that we are our Best Self, yet we are expected to keep up that Best Self in both appearance and actions. That’s a recipe for confusion for sure.

I had a great conversation with a really smart and insightful and hilarious girlfriend the other night (yes, compliments abound, and I hope she’ll accept them if she reads this article.) She’s a mother, she’s a strong woman, she works for a hip small company, and loves her life in general. Let’s call her ‘C.’ C was telling me that she’s observed a habit in herself that has started to bother her. When another woman asks her how she’s doing and the other woman isn’t doing so well herself, C will then answer negatively about her own life. Like even if she’s killing it at work or her kids did something awesome or she’s feeling really good about her health, she’ll actually find things to complain about, or even twist the truth to make it sound like less. I hung on her every word, because I observe this in myself (and others) too. I often wonder, what’s so wrong about being happy? Are we supposed to feel bad about happy? Does misery really love company that much?

Do you notice that when you answer the simple question, “How are you?” with more of a complete thought than fine or OK, people don’t always know what to do with themselves. If you actually show some vulnerability or emotion to describe how you are, people truly don’t always know how to respond? Particularly if you come back with something positive. And I think, particularly if the conversation is between two women. This is so similar to our hesitancy to say thank you. To allow and enjoy the gift (it’s a gift!) that we receive as care and concern and compliment from other gals.

At the end of my time at the gym, a funny thing happened. I was done lifting and was working through some yoga asanas to stretch out. There was an older woman (probably also in her 70s) nearby working with a personal trainer, and they were doing some yoga poses as a warm-up. It was clear from her slower movement and from what the older woman was lamenting to her trainer, that she was new to these moves and she felt funny and uncomfortable. (Um, also, she was in her 70s – and if I’m going to the gym when I’m 70, I will consider it a win. Period, end of story.) The old woman got my attention, and said (partly to me, partly to her trainer,) “That woman can do it, why can’t I?” She was smiling and inviting a conversation, so I said that I’d been working on it for a while now. But then I heard myself say something like, “…but I’m still not very good…you’d think I’d be better at it by now….I’m even more likely to fall out of balance when I’m this sweaty….”

And then I caught myself in my own BS and thought about the conversation I’d just witnessed a few minutes earlier about the turquoise shirt. I walked a couple steps closer to her, and I smiled, and I said, “You know what? I wish I’d just said thank you. So, thank you. I’ve worked hard on it.” We both smiled and she laughed and said she’d keep working, and she shook my sweaty hand.