Posted by Carol Nissenbaum of Suburban Misfit Mom on August 1, 2016 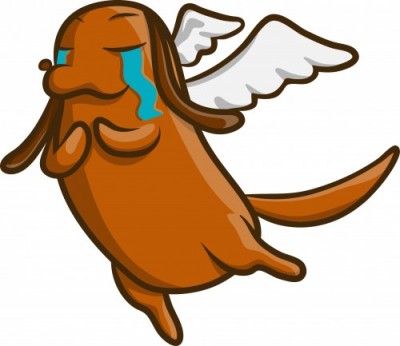 I met my best friend when I was 40. She was only 3 months old and introduced herself by peeing on my foot. Thus began a relationship that would last more than 14 years and change my life forever.

It all began on Easter Sunday back in 2002. We decided to go to a local pet store and “just look” at Yorkies. Neither of us had ever had a dog. We told the kids, who were then 12 and 8, that we had to turn our minivan in because the lease was up. They grudgingly got in the car and were delighted when they realized our true destination. The store only had one Yorkie and it resembled a rat. The store owner also told us that Yorkies yap a lot and they don’t do well around kids. We looked at other puppies but none did it for me. Disappointed, we turned to leave.

Then it happened. As we were heading for the door, I saw a young couple cradling a tiny black and white dog. My heart went “zing” and I just had to have that pup. I stood by while the couple discussed whether or not to buy this dog. “I don’t know,” the girl said. “Do we really need a third dog”? “NOOOOOO!!!” I silently screamed. “Step away from the dog!” But I just stood by while they debated. I was shaking with excitement and dread. Finally, they reluctantly turned to give the little dog back to the store clerk. Five seconds later, I said “I’ll take THAT one!” I didn’t even know her breed, or her sex, or whether she was hypoallergenic, as my son and I both suffer from dogs and cats. But I knew that she would be mine.

There was a little area where you could take a puppy in to play. They handed her to me and my heart virtually melted. She toddled over to me, lifted her leg, and peed on my foot. That sealed the deal. We found out that she was an 11-week-old schnoodle, a hybrid of a schnauzer and a poodle. She had come from a farm in Nebraska and was very shy. She was a runt and had been lost under a pile of puppies. If that couple hadn’t been holding her, I never would have seen her, so it was meant to be. She was hypoallergenic and projected to grown to around 12 lbs. Before we knew what we were doing, we were paying for the dog and several hundreds of dollars in dog equipment.

As we walked out of the store, a debate raged over the name. I suggested Farfel (from Seinfeld), Bingo, and Oreo. All were shot down. The rest of my family came up with potential names, but none seemed quite right. Just then, a big man who looked like Mr. Clean, tall, shaved head, and with a big hoop earring, approached and inquired about the dog breed. When we told him schnoodle, he said, “You should name her Noodle!” And thus our little bundle of love became Noodle P. (for Pudding) Nissenbaum.

The first night was awful. All she did was cry. She kicked over her water bowl by accident and had to be dried and comforted during the night. It was around the time that we looked at each other and said, “What the FUCK did we do?” Our kids were older, they (and we) were sleeping through the night, and we went and tied ourselves down for the next 12-15 years (that’s 84 to 105 in dog years!) But, she was non-refundable and so darn cute.

Eventually we settled into a routine and having a dog was great. Noodle saw us through a lot over her life, getting us through good times as well as bad. I always used to say she was an old soul. She was a great listener and confidante, never interrupting except to lick the tears off my face. She was smart; you couldn’t say or even spell the word “walk” around her without inciting her to riot; we used the code term “W,” but eventually she figured that out too. Just saying, “do you want to go for a W” sent her running for her leash and dancing in happy little circles.

We never walked her. Rather, she walked us. All 11 pounds of her would pull me down the street, stopping at every shrub and bush to release a microscopic drop of pee. She never took a W without taking a dump. I always held the leash and I always made my husband hold the poop bags.

Her favorite toy was a stuffed dreidel that sang the “Dreidel” song. Every year we would buy her a new one for Hanukkah. We spent hours tossing that thing down the hall and she would happily trot after it, often hopping back with it in her mouth, panting for more. She was a finicky eater and we created a tiny monster, giving her table food including but not limited to pizza crusts, eggs, and Cheerios, especially Honey Nut. When we ate, Noodle would stare at us and take one step closer with each bite. We didn’t need a Dustbuster; we had a canine version that never needed recharging. Anything that was dropped on the floor inevitably led to a Mexican standoff, and she usually won the battle.

Noodle was such a happy dog. She could often be found looking out the window, nose pressed up against the glass, parting the curtains in search of her loved ones. She would give threatening woofs to those passing by, although she wouldn’t have had the guts to go after anybody. She liked to menace big dogs with her biggest bark, but would quickly turn tail as soon as they paid attention to her. She didn’t get along well with other dogs; she thought she was a human.

Noodle saw our family through many years of joy, illness, Bar and Bat Mitzvahs, graduations, love, and loss. She was a source of great comfort. As she began to age, she showed little sign of slowing down, remaining as frisky as a puppy. My daughter threw her a Bark Mitzvah when Noodle hit 13, which is 91 in dog years, and we saw the same happy pup she’d always been. Her only health issues were a mild heart murmur and some hearing loss. Maybe she’ll make it to 17, we’d think, crossing our fingers and toes. Life without Noodle was unthinkable. Couldn’t remember life before her and certainly couldn’t conceive of life without her.

She was comical, goofy, and lovable. A best friend for the ages. The older she got, the more she got under your skin. I would breathe in her unique dog scent and try to memorize it. Then I would start crying and she would lick away the tears, which made me cry even more.

One July night, after a rousing game of “fetch” with the dreidel, I suddenly heard a “thump.” I looked over and saw Noodle lying in a puddle of urine. She couldn’t get up and was shaking. My heart started to pound. I called the vet with an emergency and they told me to bring her right in. Noodle HATED the vet, Dr. Larry, and would press her little nose up against the glass in the car and put her paws up on the windows as if crying for help. As soon as I made the turn off the turnpike, she would start howling. Well, the next morning, when I drove her to the vet she lay quiet in the car, even when I turned in to the parking lot. What I would have given for her to howl in protest. Dr. Larry expressed concern for her, and said he would take her for a sonogram later that day. I had to go home with an empty leash and terror in my heart.

The next few hours crawled by. When he called, I thought to myself, this call could change my family forever. Please let it be a virus. Please let her be okay. Dr. Larry had grim news. “She has cancer of the spleen. It doesn’t look good. And her heart murmur’s gotten worse.” My legs turned to jelly. “What can we do? You can live without a spleen, can’t you?” He explained that indeed she could, but her advanced age and worsening heart murmur made it risky to remove. He said her chances of surviving surgery were 50/50. “What would you do if she were your dog?” I asked him. He said he hated questions like that, but I pressed him anyway. “I would go for it,” he said. There was no question that we would try to save her life. She was family.

$4,000 later, Noodle survived the surgery. The spleen was quite diseased and she had been bleeding internally. They were cautiously optimistic about her condition; she was sitting up, drinking, eating a little. We could come get her in four days. We were so excited! The next day Dr. Larry called. I looked at the Caller ID and just knew he wasn’t calling with good news. Her condition had taken a sudden turn and we should brace for the worst. She was on oxygen and her temperature was dropping rapidly. She was fighting for each breath. No, this couldn’t be happening. She was good yesterday. We were getting her on Monday. She was going to be fine.

We raced over to the vet in three separate cars. I got there first. When I entered the room, my sweet little girl lifted her head, opened her eyes, and wagged her tail “like a metronome,” as the vet said. My daughter arrived next and my husband soon followed. Like in a movie, she had waited for us to arrive. We hugged and kissed our pup and cried. This time there would be no licking of my tears, which flowed unchecked. My husband was beside himself. Soon, the doctor said the end was near, her heart was giving out, and that we should let her go in peace. We took turns saying goodbye. It was slow motion, but happening so fast. “Don’t go!” my husband screamed. “I want you to lick me one more time!” God only knows what the people in the waiting room thought when they heard that.

We each stroked her as she took her last breath. She lay still, with her eyes open. The pain was over for her but just beginning for us. We stayed in that room, kissing her lifeless body and in shock. The next few days were unbearable. I didn’t know it was possible to grieve that much for a dog. It was like losing a family member. Fine on Tuesday, dead on Friday – inconceivable. The tears were endless for all of us.

Today was especially tough, as I got Noodle’s ashes back. They are sitting in a pretty tin on my breakfront. Next to them are her collar, her leash, and the dreidel. It is a shrine to the most affectionate, loving pet a girl could ever have.

This story does have a happy, if bittersweet, ending. As I write this, my new puppy, Mindy the Morkie, is laying in her playpen squeaking a rubber duckie. The cycle begins again…