Posted by Jennifer of Suburban Misfit Mom on September 13, 2016

I’ve been thinking about you since we crossed paths last weekend at the party. You greeted me enthusiastically with a “Jenny!!” and proceeded to tell those around us that we’ve known each other since childhood.  Almost 30 years!  You still can’t believe that you ended up working with my husband and how you recognized me immediately when I came to the office for a visit.

We talked about the town where we grew up and how things have changed. You were shocked that I didn’t remember so-and-so or her sister or her brother that did that crazy thing.  I reminded you that I went to private school after junior-high, so quickly lost touch with friends and the local social life.  My husband chimed in predictably, as he stepped away to grab us drinks, to joke about my four years at the correctional facility – an inside joke.  Although thanks for telling me not to worry, that it was a great school!  While I never doubted the excellent reputation of my not-at-all-corrective alma mater, I was very impressed that you knew all about where the school was located and the small class sizes.

Class sizes, according to you, that would make a parent feel good if their daughter was a bit promiscuous. A father can sleep better at night knowing that their daughter is only screwing twenty private school guys as opposed to a hundred public school ones, right?

Pretty sure I didn’t misunderstand what you were getting at (since those were your exact words), but you giving me permission to tell you if you were being an asshole totally smoothed things over. Phew – that would have been really offensive if you had actually been retroactively slut shaming me at a backyard BBQ as I balanced my baby girl on my hip.

I’m glad you said what you did though because, in a way, it has given me permission to really open up and get a little personal in return. Truth be told, I have no idea who you are.  When my husband mentioned your name, it didn’t ring any bells – although I’ve done my best to be polite ever since.  You seem to think that being the friend of my childhood friend’s older brother connects us in some way.  It doesn’t.  I must have been about 12 the last time we were in the same room and, while I’m flattered that I made an impression on you, I had more important things on my mind – blue eye shadow, Madonna and getting my giant bangs to stay in place.

I was 14 when I went to private school. By then I had made out with several boys (second base – gasp!), gotten drunk on wine coolers at a handful of football games and had earned a pretty scandalous junior-high reputation.  Do me a favor.  Look at your 14 year old daughter.  Still your little girl, right?

My father felt the same way. He knew that I moved too fast.  He knew that I made dumb decisions.  Though, despite what you think, my going to private school had nothing to do with how many guys he thought I could (or would) potentially screw.  It was about keeping his daughter safe from people who believed that my reputation gave them license to corner me in school hallways, call my house after midnight with invitations and threats, drive by my bus stop leering and laughing, regularly fill my locker with pornography and piss, and scratch “Jenny Loves Dick” into classroom desks.

But how could you have known that I hadn’t even seen a real dick yet? The shockingly detailed drawing of me being bent over and taken from behind scrawled onto the floorboards of the town gazebo with a black sharpie would lead anyone who saw it to believe otherwise.  I guess the caption “I fucked Jenny and she loved it” could be misleading.  Kids, right??

But that was such a long time ago! Obviously I’m totally over the fear and embarrassment of being targeted emotionally and physically and sexually in my early teens.

Awww, just kidding. I’m not over it.  Sadly, I don’t think I’ll ever get over it.

I look at my two little girls – pretty, funny and bright – and I pray that safeguards are now in place in schools and within the community to protect them somehow.  I’ll most certainly do my part at home and talk to them early about their bodies and drinking and gossip, but I can’t control every bra-strap-snapping junior pervert they’ll come across while they’re out in the world.  I definitely can’t control the even more dangerous element sitting in the cheap seats of junior high and high school (and life after, apparently) taking hearsay for truth and assuming that the experience is mutual.

As a confident and kind and happy woman and wife and mother of two, it’s just so crazy to think about how much time I spent wishing that I was invisible.  Because it’s incredibly uncomfortable, no matter how old you are, when strangers think they actually know you.

Consider yourself lucky that you’re so completely unmemorable!

Enjoy the rest of your year, asshole. 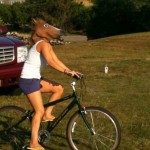